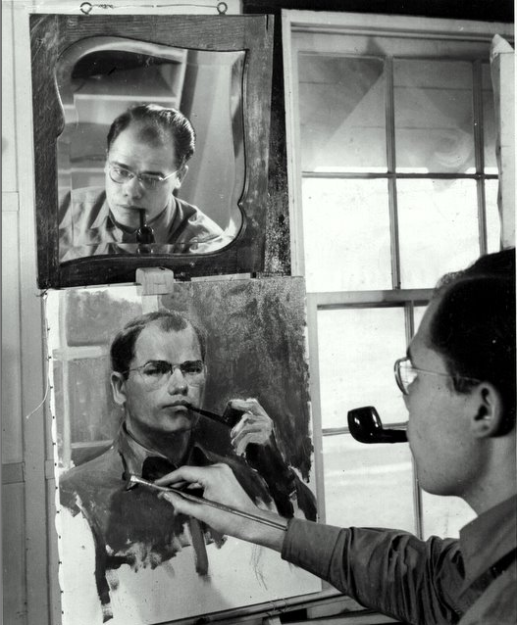 Back in June of 1945 I received a second letter from President Franklin Delano Roosevelt, which started with the words: “Greetings … your name has been selected to serve in the armed forces of the United States of America” …and I was to report for my physical examination on a specified date and location.I had gone through this procedure two years earlier but since I couldn’t see the big E on the eye chart I was classified 4F and sent home, unfit for duty in the Armed Forces. As far as I was aware, my eyes hadn’t improved but I reported to the armory as required, sent to a dressing room where all of us had to strip to our shorts and be processed for our physical fitness, to be a soldier.

This time, and I never found out why, even though I still couldn’t see the big E on the eye chart, I received a passing grade and that same afternoon was inducted into the Army of the United States. We were then sent home and would be notified by mail as to where and when we should return for basic training. In September I received a letter to return to the armory where I and all the other recruits were bused to a local train station without any word, where, why or what was to happen to us. When we finally arrived at our destination, Fort Meade, Maryland, we were issued uniforms and assigned to barracks. For the next week we were interviewed and tested to determine how we could best be used in the armed forces.

About 100 of us were put on the train destined for Fort Indiantown Gap where we were assigned to the Third Service Command, to perform various assignments, which in my case was to maintain medical statistics in the form of charts, graphs and records. The best part of this assignment was that there were no special duties like KP, guard duty, cleaning and the like. There were still German prisoners housed here who were assigned these menial tasks and Military Police were assigned to see that they carried out their duties.

Well, my statistics assignment didn’t appeal to me very much so during the next few days I walked through the camp to see what else was happening there and discovered a sign posted in front of a barracks which read, Information Education Branch. This sounded pretty interesting to me so I went in to see what was going on. I found that they had an art department and the Major, who was in charge, was looking for an artist to replace the Sergeant who was soon to be discharged. To make a long story short, Major Williams liked the portfolio of work that I brought back, after a weekend pass home, and had me transferred to his office the very next day.

During the next several weeks I worked on the second floor of the barracks painting pictures for the mess hall as well as posters and signs which were needed for various camp activities and events. During evening hours I spent time at the camp recreation center where I set up an easel and painted a self portrait. The camp newspaper photographer turned up when he heard about my self portrait, snapped a picture and a few days later I found the photograph in the camp newspaper.

Several weeks later, during off hours, I painted another portrait of myself working at my workstation. Whether or not my activities were serving our country I couldn’t say, but it certainly was serving me. Around Christmas time I was transferred to Amarillo Air Force Base in Texas where I was assigned to make posters and decorations for the Stark Mad Club, which was the base entertainment center  where I arranged to have a private room, where I slept as well as worked on silkscreen posters for the U.S.O. groups that entertained the troops. Of course, my work was so important that I was promoted to the rank of corporal.

I guess I should at least be thankful to FDR, for sending me the “Greetings” letter, and the U.S. Congress, for passing the Veteran’s GI Bill, which resulted in most of my art training.